Historical notes on the city of Paestum

HomeHistorical notes on the city of Paestum

Historical notes on the city of Paestum

Founded by the Greeks around 600 a.E.V., it was initially called Poseidonia, from Poseidon, or Neptune, god of the sea, to whom the city had been dedicated. Between 400 and 273 ahead it was occupied by the Italic population of the Lucanians. In 273 it became a Roman colony with the name of Paestum. But it is undoubted that the foundation of the city was preceded by the planting of a commercial farm on the left bank and near the mouth of the river Silaros and that the malarial conditions of the land then induced the primitive settlers to move the town to the east, on a bench limestone slightly raised on the plain and on the coast, along the course of another minor river (river Salso or Capofiume). From the primitive plant on the Silaros developed the sea and fluvial port of the city and near it arose the Temple of Era Argiva, which soon became one of the largest and most revered sanctuaries of ancient Italy: about 50 stadiums separated the city from the Heraion and its emporium on the river. The end of the Roman Empire roughly coincided with the end of the city. Around 500 E.V., in fact, following an epidemic of malaria, aggravated by the unhealthiness of the territory, the inhabitants gradually abandoned the city. The rediscovery of Paestum dates back to 1762, when it was built the modern road that still crosses it. ORIGINS OF THE PAESTUM AND MAIN HISTORICAL VICARS The most important Greek colonies in the Mediterranean were those founded in Asia Minor and in Magna Graecia, a term that indicates the set of cities founded by the Greeks in southern Italy and Sicily, one of which was precisely Paestum. The homeland of Paestum was Sibari, founded in 720 a.E.V. from achei and trezeni, which were therefore called sybarites. The latter were famous for their wealth, luxury and pride. The historian Diodoro Siculo, of the I cent. a.E.V., wrote that 'the Sybarites were slaves of the belly and lovers of luxury'. Stradone, a Greek geographer who lived between 60 and 20, tells that the Sybarites had created a fortified settlement near the mouth of the Sele River, extending their influence on the surrounding territories. We are at the turn of the seventh and sixth centuries. aEVMoneta depicting Poseidon (beginning of the V century) The foundation of the city was due to the need that Sibariti had to open a commercial road between the Ionian and the Tyrrhenian through the ridge of the Apennines, avoiding the circumnavigation of the Calabrian coast and the Strait of Messina. The colony, located in a strategic point, at the center of the intersection of the commercial routes between the Ionian basin and the Italic regions, was called Poseidonia in honor of Poseidon, god of the sea. It was in 510 a.E.V., following the destruction of Sybaris by the Crotonians, when many Sybarites fled to Poseidonia with their riches, their experience and their spirit of enterprise, that the city reached a high level of economic and political power. The construction of the three known temples dates back to this period, with the name of Basilica, Poseidon's temple and temple of Ceres, coeval with that single Greek fresco discovered so far, in the Tuffatore's tomb. In the fifth century, the Lucanians, an Italic people, began to infiltrate the colony, leaving numerous testimonies of their influence in frescoed tombs according to the model of the Greek masters. At the end of the fourth century, aleatisi with the bruzi, they sustained a long struggle against the Greeks for the dominion of the new territories towards the sea, which ended with the reaffirmation of their supremacy over the city. In 273 a.E.V. the Romans occupied Poseidonia which thus became the faithful Roman Paestum, which proved to be close to Rome even in the most dramatic moments of its history. During the Roman period, in the third century, economic and cultural activities flourished again: new public buildings arose, such as the amphitheater, the forum and the gymnasium, which contributed to giving the city the appearance that the excavations brought to light. Among the factors that led to the decline of Paestum, the construction of new roads for trade in the East, which ended up irremediably isolating the city from the main commercial routes, and the epidemic of malaria of the ninth century, combined with the raids of Saracen pirates, that forced the pestani to take refuge in the mountains, and to abandon the ancient Poseidonia. 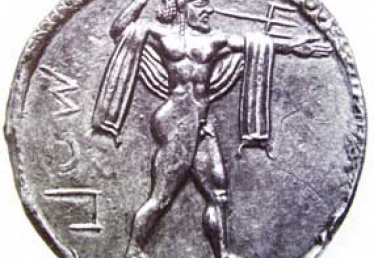